Mr. Vance
My eyes raked over her. The temporary bartender brought into my office because she’d seen the virgin auction room. I took in her delicious curves and knew I needed to have her. Except, I would never see her again after tonight. But, I always get what I want, I’m the owner of Club V and I will unravel her in ways she’s never experienced. I can barely wait to touch and lick every curve of her virgin body.

Samara
I assumed the auction room at Club V was just a rumor. Until I walked into the wrong room. I feared being fired but when the guard brought me to Mr. Vance I was instantly a hot mess. He was gorgeous, arrogant, cocky even and I couldn’t take my eyes off the very naked woman wearing a diamond collar standing beside him. The look of lust and sex on her face as he played with her and then the way he watched me, teasing. But, I’d never have to see him again after tonight. That is until fate changed everything… God help me!

Taylor Dawson spends her days getting down and dirty as a mechanic at her father’s garage, rather than with a hot guy. At nineteen, she’s so ready to get rid of her v-card but hasn’t found the right man yet. Collecting her roommate from her bartending job at Club V, Taylor stumbles across Club Owner, Jake Mesa, giving a lesson in submission. Tay doesn’t think she’d ever be able to obey like the collared woman at Jake’s mercy and slips away from the room unnoticed.

However, Jake’s security footage caught the gorgeous voyeur in his room and now she has his full attention. When Taylor’s dad admits to a business disaster that could end not only the garage but his life, she doesn’t know where to turn. Then Jake makes her an offer… Will she be able to resist or become completely undone?

When magazine journalist Penny is offered the opportunity to investigate the virgin auctions at Club V, she leaps at the chance. Especially when she realizes the man she’ll be interviewing is Pete Wilson, the boy who set out to seduce her in University and made her a subject of ridicule.

Now they’re both adults and he’s the subject. Penny wants revenge. Can she uncover a seedy underworld to Club V for Expose magazine? Or instead is she about to uncover their bodies and their hearts? 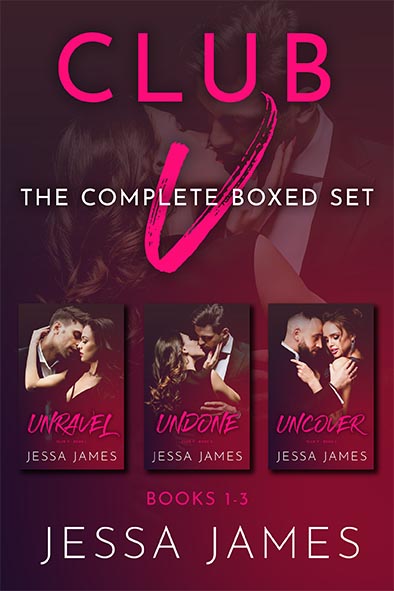